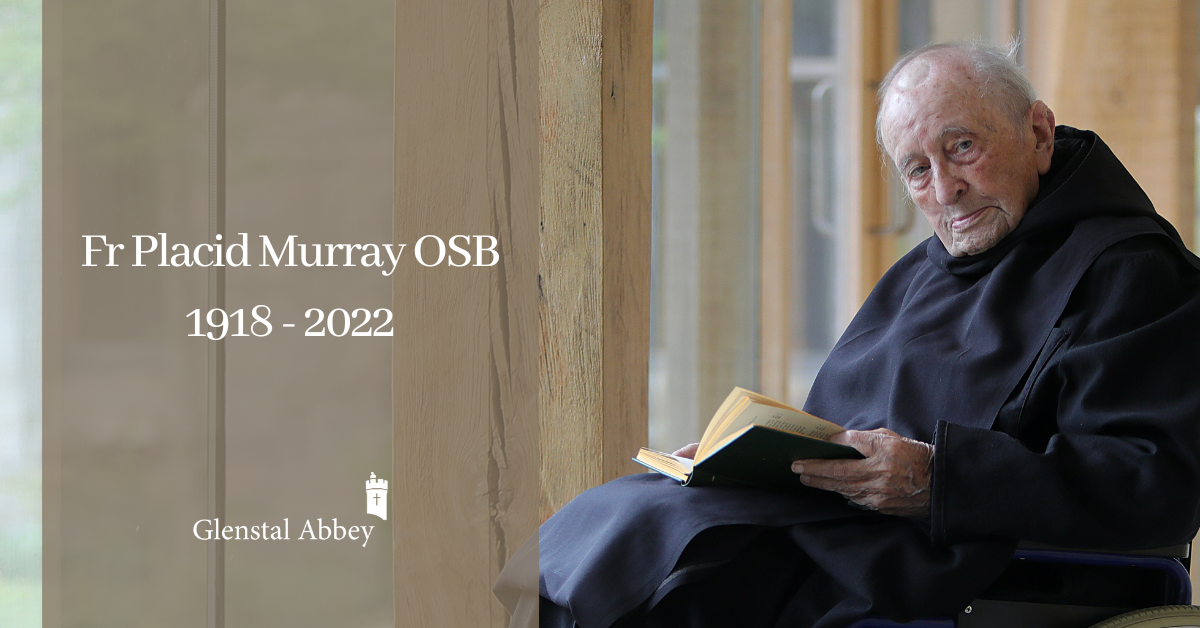 Michael Murray was born in Lismore., Co. Waterford, on 7th October, 1918. After the early death of her husband, Mrs Murray moved with her young family to Dublin. Following school at Blackrock College, and on the recommendation of the headmaster of that school, Dr John Charles McQuaid CsSp, Michael Murray entered Glenstal on 2nd September, 1935, receiving the name Placid. He made simple profession on 6th January, 1937. Shortly after this, he was sent to Maredsous, where he studied philosophy and began to study theology. On the outbreak of the Second World War the community at Maredsous, along with Brother Placid, fled briefly to the south of France, returning to Belgium when that country surrendered to the invading German forces. Abbot Celestine Golenvaux, fearing danger to an Irish citizen in occupied Belgium, sent Brother Placid to Sant’Anselmo to complete his theological studies. It was during his time in Sant’Anselmo that Brother Placid developed his love for the works of John Henry Newman, a love that remained with him all of his life.

On the grounds of delicate health, Dom Placid was ordained priest ahead of his time, at the Abbey of Saint Scholastica at Subiaco on 20th December, 1941. He celebrated his First Mass in the nearby Sacro Speco church of Saint Benedict’s monastery. The disimproving military situation in Europe and the ambiguous status, in international eyes, of Ireland, still a member of the Commonwealth, but neutral, suggested that Dom Placid should return home. This he did by what he frequently described as an inconvenient train journey, up through Italy, across the south of France and the north of Spain to Portugal, where he boarded a flying boat from Lisbon. At the time, the route from Lisbon to Foynes was one of the main conduits for the infiltration of Allied spies into a belligerent Europe.

Returned home, he became assistant novice-master and taught religion and German in the Priory School for several years. Following the resignation of Dom Bernard O’Dea in 1952, Dom Placid became Glenstal’s second Conventual Prior. He held this position until Glenstal became an Abbey in 1957. During his time as Prior, Father Placid completed the abbey church and created the present monastic refectory by integrating several rooms on the ground floor of what is still called the Fathers’ Wing.

He developed a strong interest in the liturgy and was very involved in the setting up of Societas Liturgica and was its first President from 1967-1969, with the first of its cycle of biannual meetings taking place at Glenstal in 1969. He established the annual Liturgical Conference at Glenstal, which he continued to organise until it was discontinued in 1975.

Following the election of Abbot Joseph Dowdall, Father Placid had time to return to his research on Cardinal Newman. This resulted in the publication, in 1969, of Newman the Oratorian, Cardinal Newman’s Oratory Papers, for which Father Placid received a doctorate in theology from Sant’Anselmo. A consultor of ICEL, the International Commission for English in the Liturgy, established during the Second Vatican Council, Father Placid became involved in many projects for the translation of liturgical texts into English. In 1970, he was asked by the bishops of Ireland, Great Britain, and Australia, to chair the committee that translated the Liturgy of the Hours for use in these countries. The resulting breviary, in three volumes, remains the standard breviary for most non-American speakers of English. Father Placid’s final involvement with ICEL was as a consultor for the communion prayers of the revised Roman Missal of 2011. He was not happy with the official changes to his translations.

In the years before this last endeavour, he took great delight in mastering the use of the computer. This greatly aided his final major project on Cardinal Newman. This involved co-operation in a planned five-volume edition of the cardinal’s unpublished Anglican sermons delivered between the years 1824 and 1843. The great Newman scholar, Father Charles Dessain, of the Birmingham Oratory, had specifically asked shortly before his sudden death, that this task be entrusted to Father Placid. Volume 1 appeared in 1991 and Volume 3, the latter co-edited by Father Placid, was published in 2010.

During his final years in the monastery, Father Placid, while continuing to teach classes in the Novitiate and tutor boys from the school in German, helped in monastery reception and as a confessor.

Father Placid spent the last fourteen years of his long life in Millbrae Nursing Home in Newport, Co Tipperary. Up to shortly before his death, he had an active ministry in this facility. During these years, he came to the monastery for Mass and lunch every week and the celebration of his birthday became an annual event, up to his 104th birthday, which the community anticipated on 4th October of this year, 2022. He died peacefully after the First Vespers of All Saints, 2022.

Reposing at monastery reception from 3.30pm on Wednesday 2nd November, with removal to the Abbey Church at 5pm followed by Vespers for the Dead.

Funeral Mass on Thursday 3rd November at 11.30am with burial afterwards in the monastic cemetery.

Eternal rest grant unto him, O Lord, and let perpetual light shine upon him. May he rest in peace. Amen